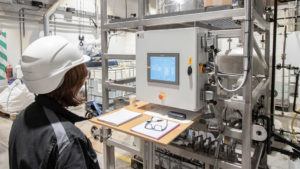 Recycling of waste is the future

Statkraft Ventures has made a first investment in Norsep AS in Porsgrunn. Norsep has developed
new technology for recycling hazardous waste from incineration plants as an alternative to landfill.
Statkraft Ventures will be an active owner of Norsep through representation on the board, as well as
contributing as an industrial and strategic partner and adding industrial expertise.</+>

Letter of intent Haraldrud
Norsep’s unique technology removes toxins and heavy metals from the fly ash, as well as it recycles
zinc, minerals and salts. The company has entered into a letter of intent with the Waste
Management and Recycling Agency in Oslo Municipality, REG, for the construction of a full-scale
plant at Haraldrud in Oslo for the treatment of fly ash, integrated with the existing incineration plant.
Statkraft Ventures will initially take a 14% stake in Norsep. The intent is to expand the collaboration
and Statkraft Ventures has an option to increase its stake to over 35%. Norsep is located at Herøya,
Porsgrunn, Norway, and has so far had OiW Process as the main owner. Norsep is the third company
OiW Process has developed that has now entered a commercial phase.

The Norsep process can be implemented on site at incineration plants. Thus, hazardous waste will
not have to be transported by trucks to landfills such as Langøya in the Oslo Fjord. Langøya is now
about to be filled up and will be phased out in the next few years.

Hub solutions where fly ash from several incineration plants is collected at a single site for treatment
with Norsep technology will be alternatives to integrated plants. Norsep has started to identify
potential locations for of a large hub on the Skagerrak coast that will primarily process fly ash from
Sweden and Norway.

Unique technology
“Rarely do you see such a good opportunity to contribute to the green shift and at the same time
create great business value,” says Anders Prietz, Head of Statkraft Ventures. “Recycling instead of
landfill is clearly the future. Norsep will contribute to a cleaner planet while being very attractive
from a business perspective. The technology is unique and has a significant market potential, ”says
Prietz.

Statkraft Ventures is a wholly owned subsidiary of Statkraft AS, and is one of the leading venture
capital investors in Europe within the energy transition. Statkraft AS is the largest producer of
renewable energy in Europe.

Competence and ability to implement
“Statkraft is already in the waste-to-energy industry and has great expertise that is important to us,”
says Chairman of the Board of Norsep, Robert Haugen of AF Gruppen. “It gives us a solidity that is
necessary when you have ambitions to execute large recycling projects based on new technology.
Credibility and ability to implement are crucial factors in this context .”

Statkraft Ventures and Norsep do not rule out the possibility that additional industrial partners may
be invited.

“Over the past year, we have had a good dialogue with potential industrial partners who are well
established in international markets. But the big task in the short term is to build up the company to
become an important player in the recycling industry in the Nordic region, ” says Haugen.

Anders Prietz, CEO Statkraft Ventures AS
Robert Haugen, Chairman of the Board Norsep AS